Recreation Northwest and Wild Whatcom continued their partnership with another day of service in Fairhaven Park. When the pandemic uprooted businesses, Environmental Education organizations were some that were hit the hardest. Wild Whatcom and Recreation Northwest first connected during the start of the pandemic for a stewardship project transplanting native plant saplings in Fairhaven Park. We have now continued this partnership nearly two years later.

… Despite a cold and rainy morning, the nine Samish Wayfinders along with their two field mentors, Adam Yost and Nick Englefried, brought their Positive Mental Attitude along with plenty of enthusiasm to help improve Fairhaven Park. 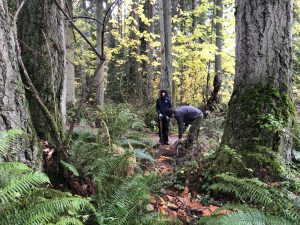 A couple of participants at the early stages of the day.

The objectives of the stewardship project:

You might be asking yourself what exactly is a social trail? Well just like what it sounds like, a social trail is an unestablished trail that gets created by people walking off trail. Then other hikers notice that trail and decide to follow it, hence creating a social trail. Over time this impacts vegetation and the nearby ecosystem.

Adam Yost, from Wild Whatcom, led the group of students through a morning group circle before we went over our objectives for the day. Wild Whatcom is uber familiar with Fairhaven Park so they were ready to get the trail project underway.

Many of the students had transplanted plants before through other service projects so we quickly reviewed the best practices for transplanting sword ferns. 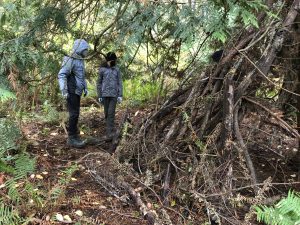 Couple of students ponder the best method forward at dismantling a shelter that was found along the social trail.

Many of these branches were then used to help bring the trail back into its natural state. 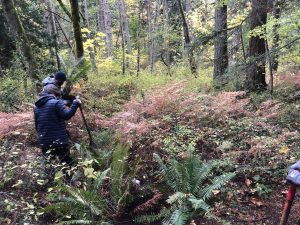 A group of students transplanting some sword ferns at the other entrance to the social trail. 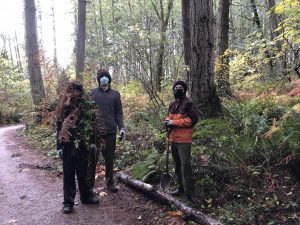 For those that know Recreation Northwest, know that we like to have some fun during our stewardship events! A student becomes one with the ferns! 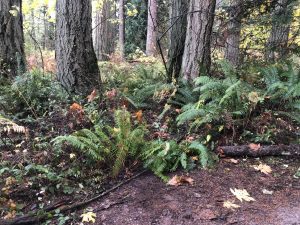 Instead of between Two Ferns, a fern was placed between Two Firs to help further the process of decommissioning the social trail. 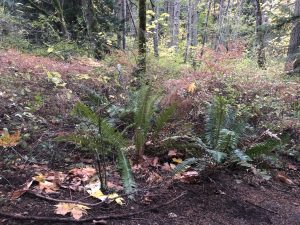 Where is the trail? The other end of the social trail was decommissioned with the help of sword ferns and snowberries.

After a break for lunch to refuel, the Wild Whatcom crew shifted gears.

Objectives for second half of the day: 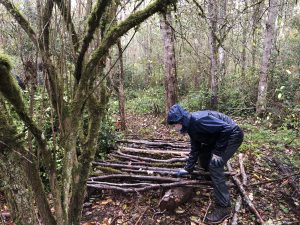 Laying down the base layer for the compost pile. 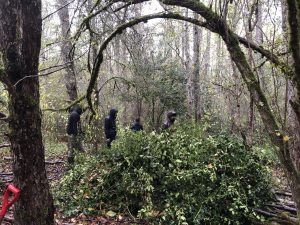 A massive pile of holly & ivy to begin with, it eventually shrank into two smaller compost piles. 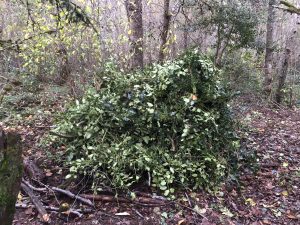 Once in smaller pieces, it is much easier to break down naturally back into the soil. 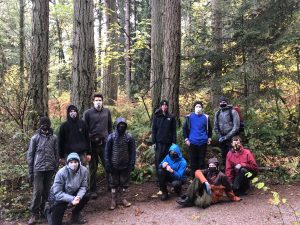 Despite a cold & rainy day, the students remained cheerful throughout the stewardship project with Recreation Northwest.

We would like to extend our gratitude to Wild Whatcom, and the Samish Wayfinder students that participated in the day of service. We accomplished more than we planned!

As always our stewardship projects can not happen without Amy Brown, Volunteer Coordinator with the City of Bellingham. Huge thanks for loaning us the tools to make these projects possible.

This restoration project would not be possible without the generous support of your donations. Please consider making a donation. Thank you for supporting our mission, to protect the spaces where we live and play.