The Krank Events Cle Elum 24hr Adventure Race this past weekend was definitely a challenge, but it was a blast! We pulled into our camp spot on Friday night, a pullout on the side of a logging road, around 10:30pm, set up our tent and bivy and crashed until 6:30am race day. We packed up and headed to race HQ to check in and get packed. We had one large plastic bin for our team to store all the gear, extra clothes, and food we might need for the entire race. The bin would be transported to each transition area for us. At each transition area, the only thing that was going to be supplied by the race organization was water, so we needed to make sure that we had more than enough food for 24+ hours for all 3 of us in our team bin. We knew it would be really hot during the day and would need more water than what we started with at the beginning of each leg, so we made sure to pack a few water purification systems. After spending close to an hour packing and sorting food and gear, we walked over to the start for the race briefing at 8:45.

After a brief summary of race rules, scoring, and what we would be looking for at checkpoints, the race maps were distributed. We had less than an hour to look over the 6 topo maps and plot our route. Although the whole course was covered on the maps we were given, they were custom maps with varying scales that overlapped in unusual ways…very different from a standard map grid where one map picks up where the other left off. 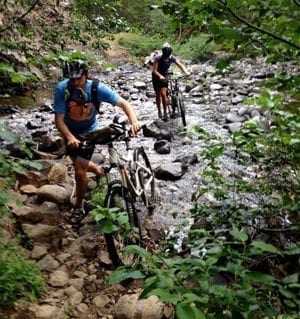 The race started promptly at 10am, the weather warm and muggy, chance of thunderstorms in the forecast. There were 5 segments to the race. Mountain biking was first, third, and fifth. Trekking was 2nd and 4th. Route planning was fairly easy for the mountain biking portion since we stuck mainly to roads and trails except for one short (less than 5 minute) bush-whack. Planning for the trekking segments was much harder. Following roads or trails on the trekking portion often meant adding considerable distance to our route. Many of the checkpoints weren’t even on roads or trails.

As a result, much of our intended route was off trail, and we spent extra time studying the maps in those areas to find terrain features such as ridges, gulleys, or bends in rivers/streams, to help guide us through those sections. We knew we would be doing a lot of off trail travel in the night, when using distant landmarks as a guide would be impossible.

A couple hours into the first bike leg, the first thunderstorm rolled in. We were grateful for the overcast skies and some refreshing rain! The first bike leg included everything from some bush-whacking to hike-a-bike up loose rock to riding down steep, dusty trails on exposed ridges and down rugged gullys. We had several river crossings, typically about mid-shin to knee deep. Despite the rough trails and challenging terrain, the views on this leg were spectacular! This first bike took about 8 1⁄2 hours. 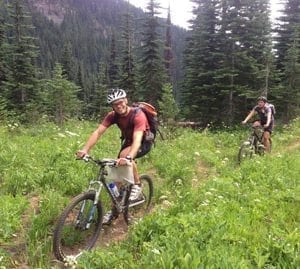 We reached the first transition area at around 6:30 where we resupplied on food and water, changed shoes, and headed out on the first trek. First, we followed a riverbed, crossing the river multiple times for several checkpoints, then we headed up towards the foothills. The terrain was very hilly with a mix of forest, open meadows, and huge rock slabs. We were constantly adjusting our route to take advantage of easy travel through meadows and along rock slabs wherever possible, but there were still places where there was no choice but to bush-whack. The sun was setting as we reached the top of one of the rock slab ridges. It was gorgeous! No complaints about the scenery on this leg either. We got through the first trek with only a few minor navigational hiccups, but none of them cost us more than a few minutes. We reached the second TA at around midnight.

After checking in at the transition area, resupplying with food from our tub, water from the aid station, and switching to our bike attire, we headed out with our Magic Shines and extra batteries for our second of three bike sections. We followed entirely rideable roads and trails for the entire segment, except for one short bushwhack which saved us from having to do some backtracking. After another thunderstorm and decent rain-shower, we reached then next TA, resupplied, and were headed out on the second trek by around 3am. 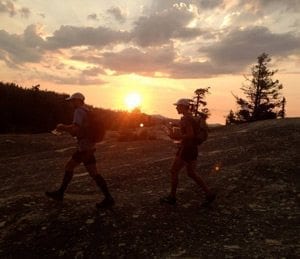 The final trek was another long one, it took us about 8 1⁄2 hours as well. This leg started in the dark and finished around the 25hr mark. It poured rain for the first 5 or so minutes of the trek, but luckily, let up after that and we could soon see bright stars overhead once again. This leg proved to be the most challenging as it involved heavy bushwacking up and over hills, through drainages, and down steep gullies. Yes, sleep walking during a race is possible. Not sure how, but it is! We made it back to the last TA, relieved to be at the start of the final leg of the race.

We started the final bike around noon. By this time the sun was high and the temperature was in the mid 90s. Whatever rain had fallen from the thunderstorms was completely gone and the trails were dusty and dry again. All three of us were pretty exhausted by this point, but ready to finish strong! After a solid climb, we enjoyed a beautiful view, yet again, with a sweet descent all the way into Roslyn and the finish. Seeing the finish line of our epic 28hr adventure was a sweet sight, indeed!

Another fun aspect of an adventure race this long is that we had no idea where other teams were or how many checkpoints they made it to until the finish. So, we were pretty excited to hear that we were the only team to complete the entire course, tagging all of the checkpoints including the pro-checkpoints and we made it in 2hrs before the cutoff at 30hrs. The course was more difficult than we had anticipated, which was a great test for us as we prepare for nationals. All in all, we couldn’t be happier with how the race went. This was a great experience in a beautiful area that was new to all of us.

We made a few minor mistakes, but we quickly realized them and were able to get back on route without wasting more than a few minutes. Despite the scrapes and bruises, sore bottoms and a little sleep deprivation, it was well worth it! We can’t wait to do it again!

Emily is a member of the Quest Adventure Race Team. She loves getting outside for adventures and sharing them with others.