Phillips 66 Ferndale Refinery employees came out for a Good Energy community volunteer event to continue to help with our stewardship work in Fairhaven Park. In preparation for the event, I (Todd) was coordinating with Brandi, their Community Relations Coordinator. We share the email thread with you to show that we all like to work hard & have fun!

You’ll also be able to see all the work they got done later in the article!

“Brandi,  We’re planning for 3 Teams – “A, B, C”. Elizabeth will lead the A & B Teams. I’ll lead the C Team. Below is a brief overview of which areas we’ll be working on and the jobs to be done. Quite similar to last year except scattered holly instead of one big blackberry patch!

C Team – North of Trail Corridor. 2 groups of 8 people will work in separate areas to clear invasive Holly and Ivy. This will be the most labor intensive group! I’m relying on the tenacity of the group that cleared out the blackberries last year to SEEK & DESTROY all that stands in our way! One group will be the CUTTERS, another group will be the DIGGERS. Everyone will pile the materials in compost piles on site.

NOTE: This group should wear long sleeves so they don’t end up looking like Dave did by the end of the day last year with arms that looked like he got attacked by a cat!

Brandi replied: Dave was given a long sleeve shirt this year. You may appreciate Dave’s safety message from earlier this month…

Last year the New Safety Guy (Dave) thought it would be a good idea to participate in a community project as part of Good Energy Month. The RLT volunteered to help remove unwanted plants/weeds from the Fairhaven Park in Bellingham, a project that the Ferndale Refinery has participated in for several years. I thought this would be a great “walk in the park” and a chance to take in some fresh air and spend an afternoon away from the Refinery. It came at a cost…

Little did this experienced safety guy realize that I would be face to face with the PNW’s worst outdoor nemesis – the blackberry bush.  Moving to the PNW for the second time, I had forgotten how evasive these things were and how unwillingly they came out of the ground. I also forgot to wear a proper long-sleeved shirt and probably could have benefited from thicker jeans. I ended up a bloody mess from my elbows down to my wrists without even knowing I had been hit. My jeans had remains of thorns that reminded me of the experience for a few washings. Brandi Civico said later that it looked like I had lost a battle with feral cat. My wife asked what kind of “Safety Guy” I was. Lesson learned…

As I look forward to the next event, which is scheduled for April 27th, and I have my arsenal of PPE ready. Long gloves, thick long-sleeved shirt, and a better pair of Tough skins. I encourage others if they want to participate in a great half day of giving GOOD Energy back to the community to come join us. I’ll bring the band aids.

(published with Dave’s permission) For reference, this was Dave at the end of the day last year, in 2021. 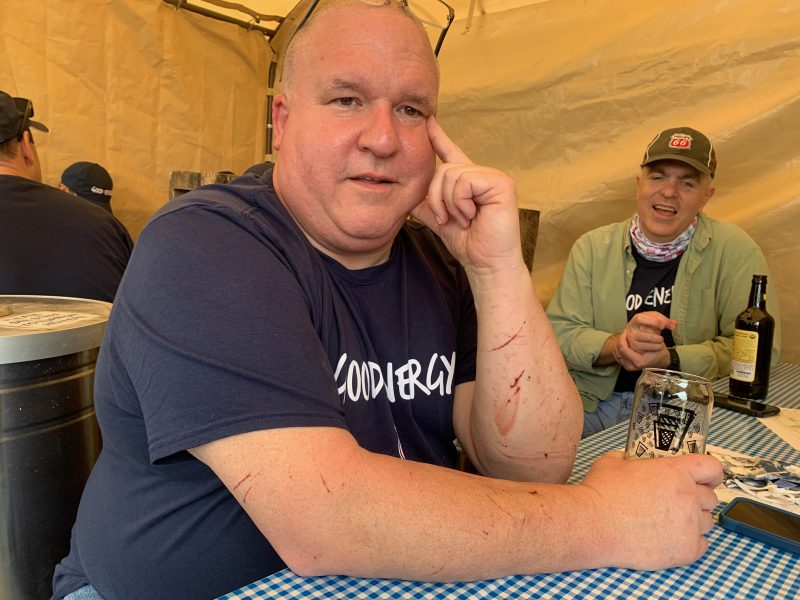 We gathered for lunch in the Fairhaven Park Upper Shelter, with 20 P66 employees coming out for the day to continue their work to remove invasive species in our stewardship area of the park. Outfitted in Good Energy gear, we headed out into the park for an overview of our project and a brief introduction to the park and trails. Then the teams got to work! Our main goal was to work in the space labelled “Holly Removal Zone” below. 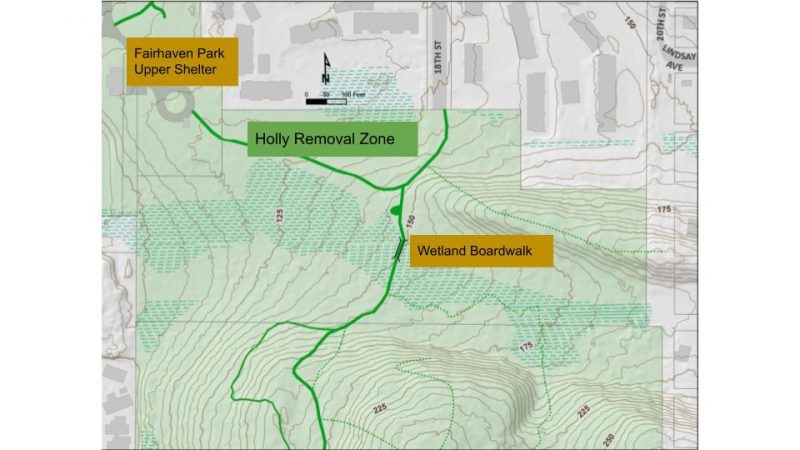 This group was set out to clear out invasive blackberry, thistle, and horsetail in our Upper Meadow Buffer/Native Plant Garden. They did a tremendous job of hunting down the variety of invasives as they were interspersed amongst the healthy native plants like salmonberries, sword ferns, bracken ferns, snowberry, and other varied species. 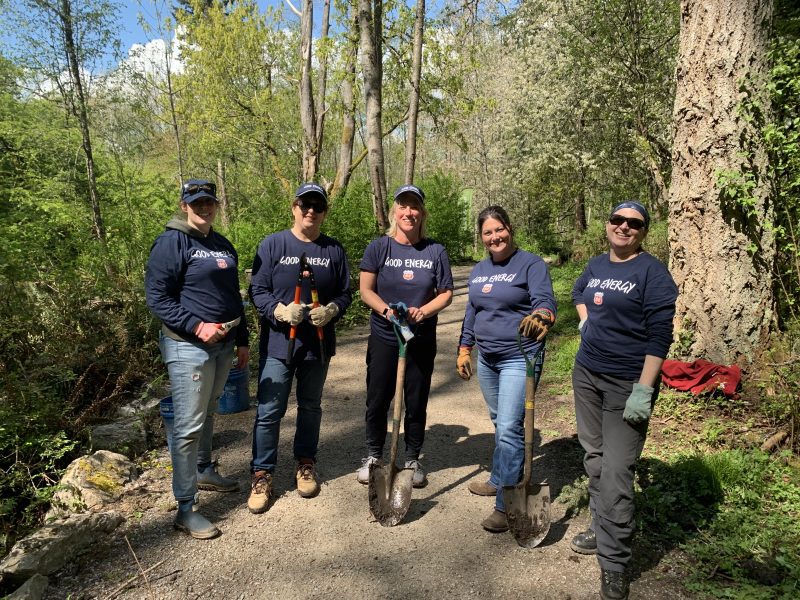 Here’s the onsite compost piles, reflective of the work getting done! This pile sits on the edge of the old trail alignment that connected Fairhaven Park and the woods now on the edge of our Native Plant Garden. 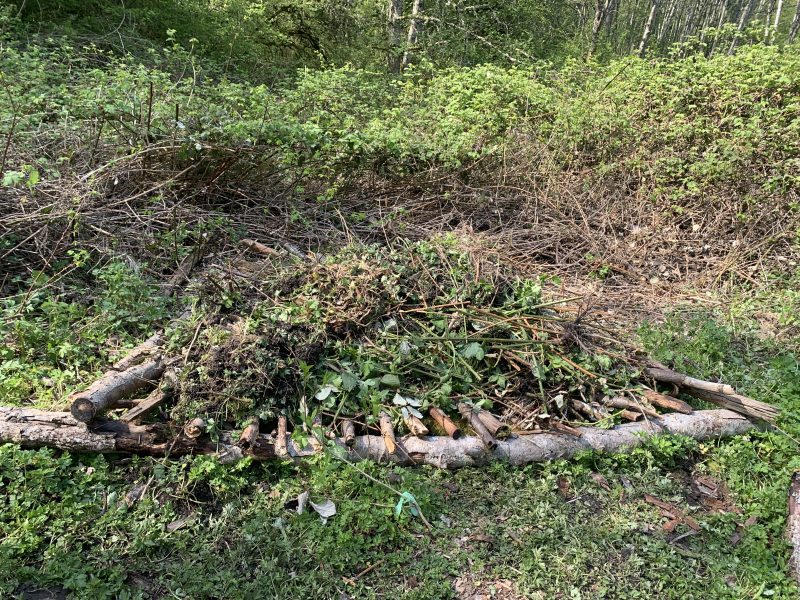 Another invasive species compost pile is located in the wetland near the old trailhead of the abandoned trail. It sits next to an earlier pile that is still in the process of decomposing. Once the material has sat long enough to decompose, we will scatter it around the area as mulch. 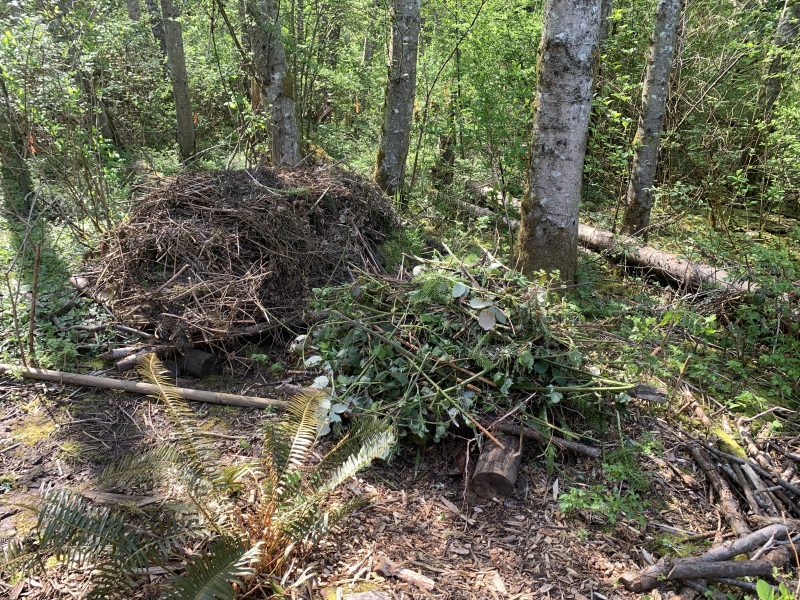 Knowing what this group is capable of, we had our sights set on removing as much holly as possible. With tools on loan from Bellingham Parks Greenways Volunteer program, we tackled the classic Christmas decorative tree- the Holly. Holly is native to Delaware, not Washington. So it has to go!

It’s all about teamwork. Here Mike (R) holds up the work that Dan (L) made happen! Nice to see the manager giving credit where credit was due! Good job guys. 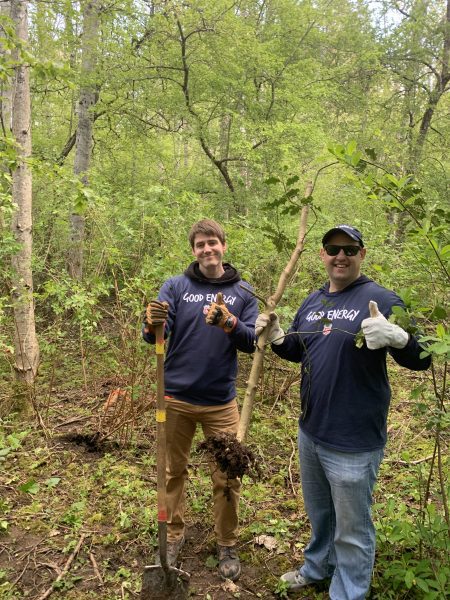 The crews moved through the area tackling everything in their paths. The CUTTERS would move swiftly through the landscape, sawing down the larger Holly trees and clipping off the branches with loppers. Then the DIGGERS would come through with shovels, pickaxes, and for the big ones- the Weed Wrench! All the materials were brought to nearby compost piles. 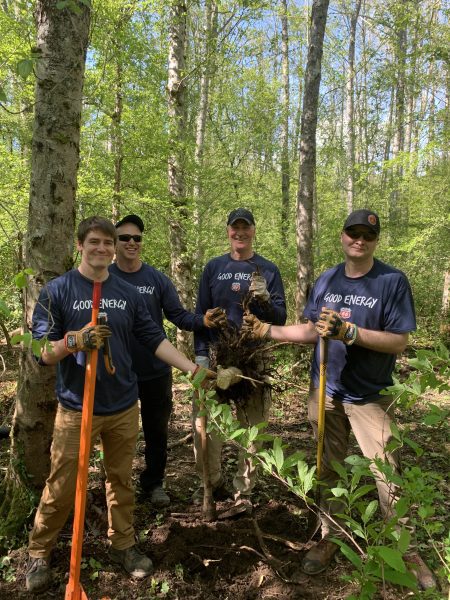 Once the piles starting growing, you’d hear me shout out, “Machete Man!” This was Ryan’s cue to come over the growing compost pile and whack through it to help all the material settle down into place. 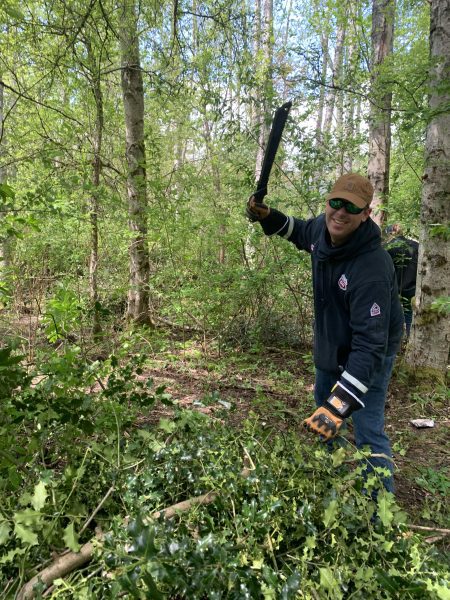 The larger stumps we left in place for the end. This one below was the largest in the area. The group would tag them with survey tape so we didn’t lose them as we continued our work. This one would have been hard to miss, however. 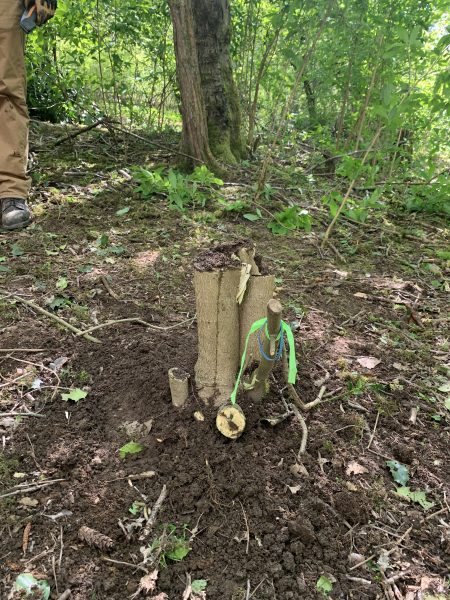 For this last stump, we brought in the Weed Wrench. Below, Carl lends a foot for Dan to start trying to pry it loose. You can see Abe in the background eyeing it and coming up with the strategy to get it out of the ground. 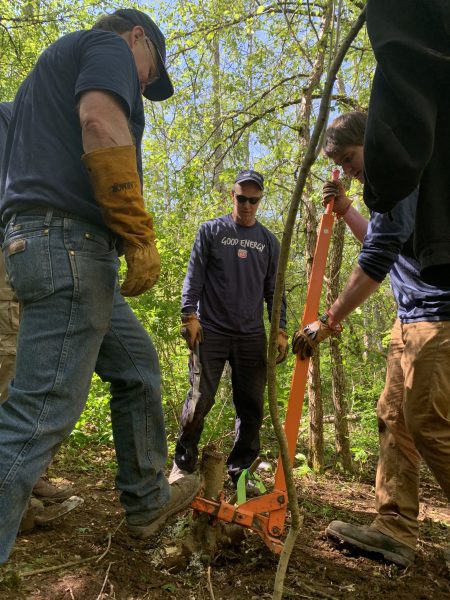 After working the Weed Wrench to loosen it, Abe took over and dug up the rootball and then the group was able to get the sizable stump out of the ground. Below, Abe holds the prize with a sense of pride shown in his smile! 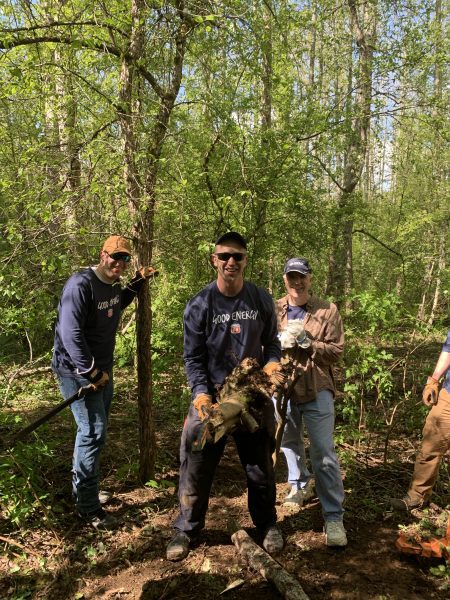 After a solid 3 hours of getting after it, the group gathered together for the final photo in our Native Plant garden. We thank Phillips 66 Ferndale Refinery’s volunteers all for their service to our project and the community. We would also like to give a big SHOUT OUT to Brandi Civico, who is leaving P66 after decades of service. It has been a delight working with you over the years. We wish you the best! 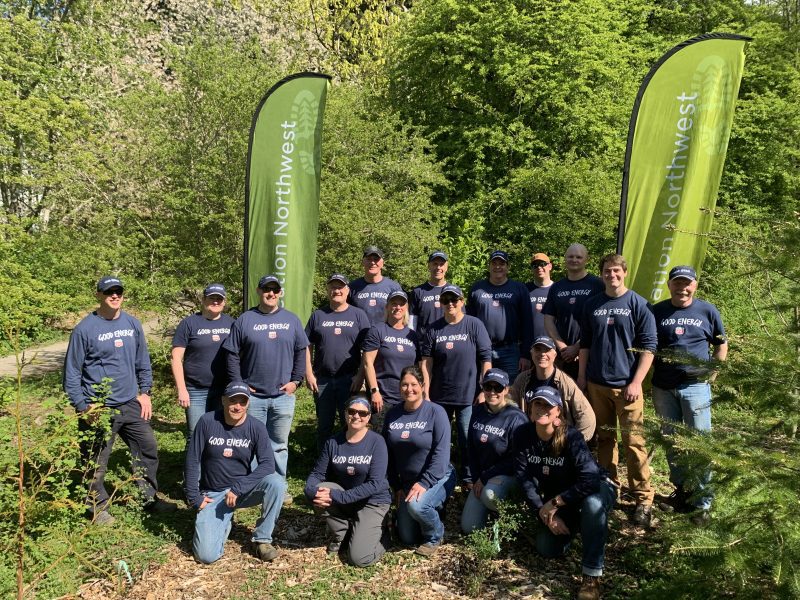 Earlier in this article, the compost piles and the work accomplished along the trail corridor were shown. The group remarked that their piles weren’t as big as the Holly compost piles. They were tasked with a particular and meticulous duty of identifying the good from the bad and only removing those species that were detrimental to the neighborhood.

The “C TEAM” in charge of Holly removal had a much more straightforward task. Focus on the Holly!! We broke into two teams and started clearing all the Holly in sight. Once to the edge of the park boundary, each group started working towards meeting in the middle. Below is one sample photo of the 13 massive piles of Holly that was laid on a lattice of downed logs and sticks to be composted on-site over time. 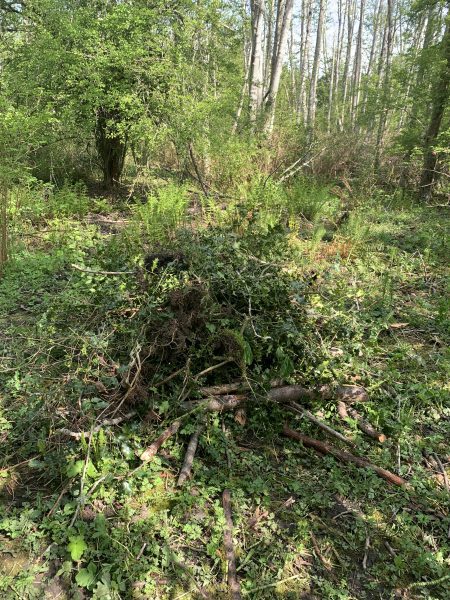 It’s relatively camouflaged below. What is pictured are 6 large compost piles of invasive Holly. You can see the bases where the lattice work below makes it so air can flow underneath and prevent the material from regenerating. This is a new approach that we have pioneered with Bellingham Parks Greenways Department. We are finding it to be successful. 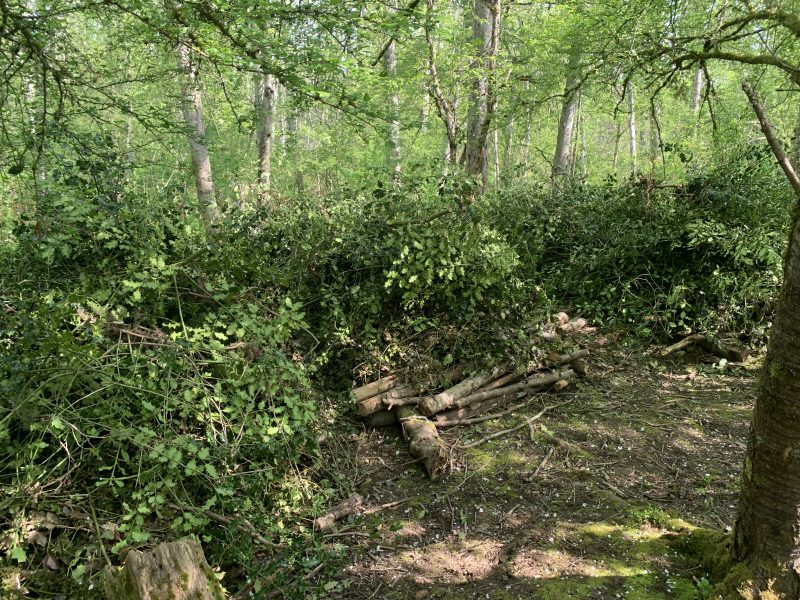 Our calculations estimate that we removed 1,300 Cubic Yards of Holly and composted it all on site! The area around the scattered compost piles is now cleared of the Holly that heretofore dominated the space. Now that the area has been cleared of these invasives, it will give other native plants a better chance of growing up in a more natural setting.

Print out the 2015 Fairhaven Park & Forest Trails Map (PDF). This map was created to show where our Fairhaven Park Trail & Wetland Boardwalk was going to be located. The map includes the Hundred Acre Wood and surrounding park properties.