From our hometown headquarters in Bellingham, representing the 40th District, our new State Representative Alex Ramel, has introduced the Washington Scenic Bikeways bill, HB 2587 in Olympia. Recreation Northwest wrote a letter of support for this legislation- Support of HB2587 – Recreation Northwest (PDF) text below. The bill will be heard in the Housing, Community Development and Veterans Committee on Wednesday.

Check out the model program from our southern neighbors: Scenic Bikeways – Oregon State Parks. Map below.

This is the House Bill Analysis 2020: 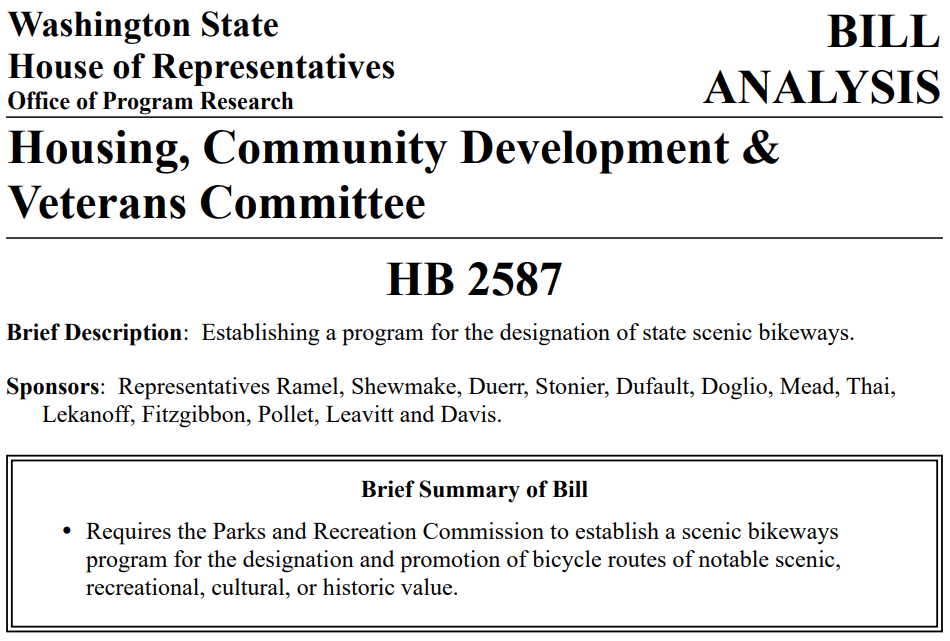 Background: The Parks and Recreation Commission has authorization to care, control, and supervise all parks and parkways in Washington. The Commission consists of seven members, all appointed by the Governor with the consent of the Senate.

Summary of Bill: The Parks and Recreation Commission (Commission) is required to establish a scenic bikeways program for the designation and promotion of bicycle routes of notable scenic, recreational, cultural, or historic value. Scenic bikeways may be comprised of bicycle paths, multiple use trails, highways, or trail facilities managed by the Commission.

Criteria for Approving a Route. The Commission must review proposed scenic bikeways in consultation with the Department of Transportation and confirm that the proposed route:    is of notable scenic, recreational, cultural, or historic value; is located on government or privately-owned land, is consented to by the land owner; and to the extent feasible:      is not located on heavily trafficked roads when less-trafficked roads are available as a suitable alternative; is not located on highways without shoulders or bike lanes when highways with shoulders or bike lanes are available as a suitable alternative; avoids complex intersections or other locations that would reduce the ease of use of the scenic bikeway by users; is colocated with locally developed bicycle-supportive infrastructure, including bike lanes, multiuse trails, greenways, or other designated bicycle routes; and is designed to minimize adverse effects on adjacent landowners.

Rulemaking. The commission may adopt rules to administer the scenic bikeways program.

Effective Date: The bill takes effect 90 days after adjournment of the session in which the bill is passed.

I am writing to you as Chair of the Housing, Community Development & Veterans Committee, to be included in the record as being supportive of House Bill 2587. I would ask that the following comments be shared with the committee.

We anticipate that the nomination of the following examples are likely candidates as potential scenic bike routes for HB 2587: Olympic Discovery Trail on the Peninsula; Centennial Trail in Snohomish County; Interurban Trail in Whatcom County; John Wayne Trail along Mountains to Sound Greenway/I-90; Green River Gorge in Maple Valley/Black Diamond. There are many more- these are the ones that I’ve experienced myself and firmly believe deserve recognition.

These routes are “extra special” because, as dedicated bike paths, they offer safety and access to all levels of ability and a variety of user groups. These routes and others around the state are also excellent economic drivers for both the local recreation economy and the tourism dollars they generate. These trails pass through rural areas that are experiencing economic transformations, capitalizing on outdoor recreation, specifically the dollars that come in through cycling and tourism.

We are a cycling state! Washington State is proud home to Cascade Bicycle Club and Evergreen Mountain Bike Alliance- both the largest state (road bike/mountain bike) advocacy groups in the country. Here in Bellingham, we have the global bike brands of Kona, Transition and Evil and smaller bike related brands and advocacy groups that have been built on the lifestyle and culture of cycling on both road and mountain bikes. These organizations and companies work together to sponsor trails on Galbraith Mountain, for example, to provide the public access and maintenance/stewardship of the land.

Recreation Northwest also has experience securing sponsorships for trail building and maintenance. We have found that there are many local businesses, recreation and non-recreation related, that are eager to be associated with outdoor activities. While State Parks may not have a lot of experience with securing sponsorships, I think you will be surprised at how many companies want to be part of projects that encourage people to get outside and be active. 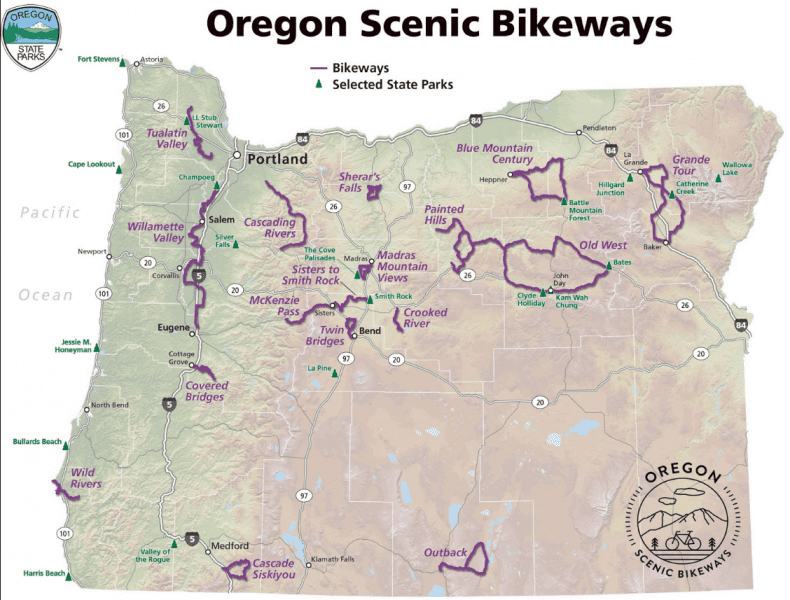